Yes, I’ll chip in to support your work!

In an evening designed to focus on the “Berkeleyishness” of Berkeley, and raise money for a great cause, three of the city’s most renowned Michaels kept hundreds of local residents laughing for the better part of 90 minutes with their wit, charm and candor. [Listen to the podcast of the evening.]

This was the third public forum Berkeleyside has put on, part of its commitment to providing quality conversations and debates on issues that matter to Berkeley, both on- and off-line. (Scroll down for a slideshow, courtesy of Pete Rosos, from the forum.)

The evening, a fundraiser for 826, a writing program that will open in Oakland to serve East Bay youth, opened with a question about how each man landed in Berkeley with his family; after Lewis and Pollan shared that former UC Berkeley journalism school dean Orville Schell was “the same midwife” responsible for their residence in town, Chabon quipped that the first home he and his wife moved into south of campus happened to be owned by Schell.

As an aside, Lewis and Pollan told a story about their first meeting, which involved a car crash into Lewis’ office at his home in the Berkeley hills: “One of the best dinner parties we ever had,” Lewis said.

The conversation on stage moved quickly into writing in Berkeley, and how each man balances family life with professional work, and schedules that demand travel and focus.

Living in Berkeley has posed certain challenges, as all three noted the experience of being pigeonholed due to their residence here. It’s a city whose reputation often precedes it.

“There’s so much baggage living in Berkeley,” said Pollan, after Chabon said it was impossible to write letters to the New York Times noting his Berkeley, CA, residency.

“When I go out of Berkeley, people think they know what Berkeley’s like,” said Chabon, noting that the city’s diversity and disparity are “much more complicated” than the stereotype. “There are many different nuances people aren’t aware of, that’s part of what I love most about Berkeley. When I travel, it’s always a relief to come back.”

Poking fun at the stereotype was also a topic of conversation, however, as Pollan shared his “only in Berkeley” moment, about an older woman at a book event at Cody’s who scolded Pollan for calling insects “pests” rather than a more PC term such as “associate species.”

Said Lewis: “It’s amazing how many people here think you want to hear their political views; you can’t get away from it.”

Thomson asked about the role Berkeley plays in each man’s writing life.

Lewis likened writing about Berkeley to “pissing in your drinking water,” but noted that living in the Bay Area provides ready fodder for storytelling.

“I wanted to live somewhere where there would be enough material so I wouldn’t have to travel,” he said. (His popular 2003 book, Moneyball, was set just over the border in Oakland.)

“I don’t want to write about Berkeley,” Lewis said, though he drew big laughs when he referred to one of his first pieces of local writing, unfinished, entitled: “Why does my City Council have a foreign policy?”

Lewis, a father of three, said it can be a challenge to balance home and work: “Books do not go well with family life. You gotta find so much space to do it.”

Chabon, a father of four, concurred.

“It’s hard to get immersed in a project when I’m home doing my share of parenting,” he said. “I have to go away to get work done.”

Chabon said he also has to be vigilant about distractions from his own wandering mind, noting a web application called “Freedom” that blocks the internet to help him focus on writing. If left to his own devices, he said, he’s likely to let a tiny distraction take him down the rabbit hole, starting on a work-related query related to, say, spark plugs, and ending up three hours later reading about the Partridge family.

In response to an audience question via Heather Flett from 510 Families, each Michael shared his favorite Berkeley traditions to do with kids. Chabon said the hobby shop under Ace Hardware, and eating at Cheeseboard pizza, are on his list. Pollan said eating, especially pizza at Arinell and Gioia, is among his son’s favorite activities with the family. And Lewis gave a shout-out to the Albany Berkeley Girls Softball League (where one parent keeps score but no one is allowed to know it, he added, and no team is allowed to win a majority of the games).

An audience member also asked each Michael to share his predictions for the city.

Said Lewis: “Berkeley politically is going to get much more interesting. It might even get a Republican mayor in my lifetime.” (An audience member shouted: “There already is!” drawing laughter.)

Chabon said he hopes the city will continue to support small businesses and resist chain stores.

And Pollan predicted the end of an era: “The left-wing resistance to change will give up at some point, I hope,” he said, adding that he’s never been to a Berkeley City Council meeting. He asked Lewis and Chabon if they had, and both shook their heads.

You heard it here first, folks. The three Michaels are taking their show on the road, coming soon to council chambers near you.

Berkeleyside’s “Three Michaels: A Berkeley Conversation” was supported by One PacificCoast Bank. Listen to the podcast of the evening. 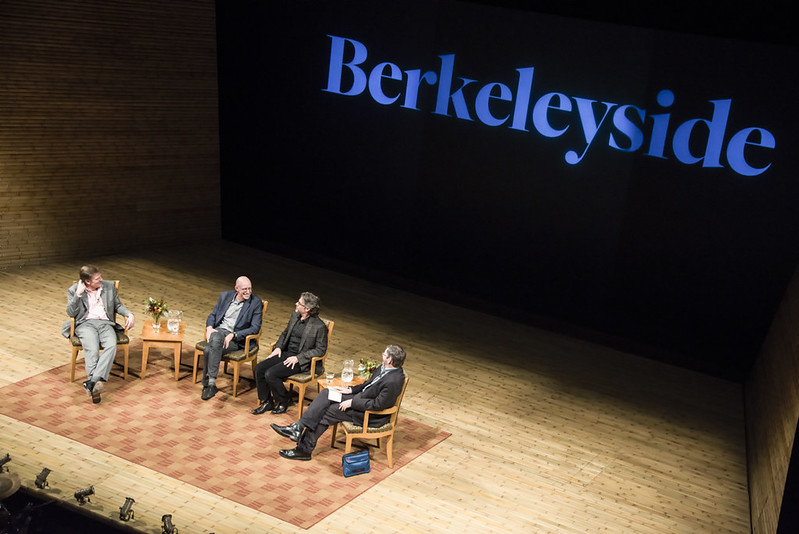