Sunday night, diners crowded into Oakland’s Hawker Fare for the first sneak peek into Box and Bells, the latest project by chef-owner James Syhabout. The only Michelin-starred chef in Oakland, for his Piedmont Avenue restaurant Commis, Syhabout plans to open Box and Bells on College Avenue in the former site of Somerset this May.

Tickets for the “pop-up” event sold out in three minutes flat, to Syhabout’s surprise. (He used Brown Paper Tickets to sell spots to the event online, similar to the way concert seats would be offered.)

When he told Box and Bells Executive Chief Benjamin Coe how quickly the seats had been snatched up, “he thought I was joking,” Syhabout told diners before the meal. “We’ve been stressing out since.”

The “meat-centric” menu offered everything from poutine laden with blood pudding gravy to roasted scallops over Meyer lemon spaetzle and expertly fried and seasoned chicken fingers served with oyster mayonnaise.

Diners were seated at communal tables, and encouraged to get to know their companions. The “eating house” atmosphere worked, as the buzz in the room only grew throughout the night and those in attendance shared notes on food and made new friends in the process. 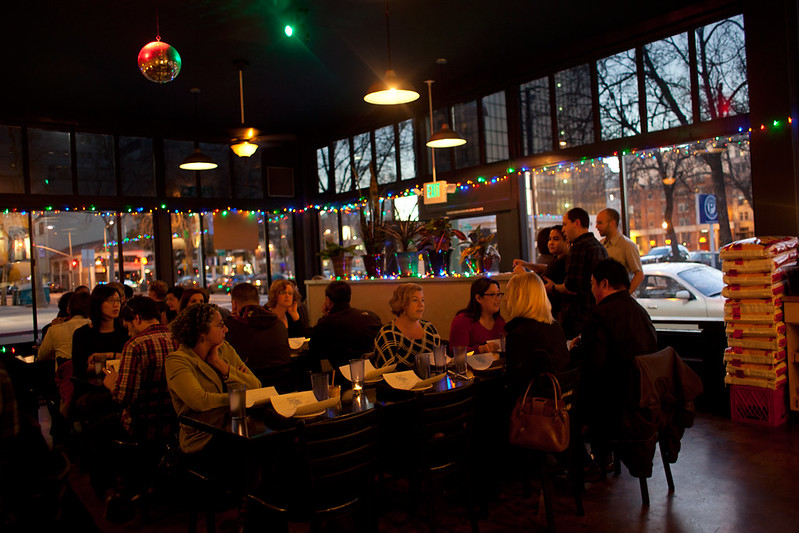 Syhabout described the philosophy behind the Box and Bells menu as “things we like to eat as cooks that no one else is making. On our days off we want to spoil ourselves and indulge.” Added Coe, “This is the food that we eat after a long day at Commis.”

They described the concept as “sort of a behind-the-scenes take on Commis.”

Syhabout said that what was offered Sunday wouldn’t reflect the portion sizes at Box and Bells. And some of the dishes may not make it to the final menu, or may be adjusted, depending on response. Coe came up with the menu, and Syhabout said his role is to be more of an advisor in the process. In the new space, the chefs plan to emphasize “bold flavors, rich food” and, of course, meat.

“Ben and I were making jokes like, ‘Man we are gonna hurt people,'” Syhabout said. “In a good way.”

He wasn’t kidding. Those looking for light and healthy would be advised to steer clear. A salad of gem lettuces tossed with herbed cultured cream and sieved eggs, and a later side dish of bone marrow-maple syrup-and-sherry-roasted Brussels sprouts, were among the only greens offered throughout the lengthy meal.

One diner complained that the dishes didn’t vary enough from a single note, and another wrote on Twitter that the meal had been “generous to the point of overwhelming. Rillettes, almonds, corned beef were standouts. Poutine was not what I was hoping for.” He concluded, however, that it was “a great start — can’t wait to see what it’s like after a few iterations.”

Another diner, who uses the handle “Oaklavore,” said the food ranked a 9.3 out of 10 and posted an in-depth review this week. Oaklavore noted on Twitter: “The only thing that didn’t scream love was my beef. It was dry, and I didn’t get enough sauce to combat it. All else was spot on.” (Oaklavore later added that it’s possible the dry beef was “a fluke because everything else was so perfectly prepared.”)

Syhabout said one goal with the pop-ups is so he and Coe will have the chance to walk around and get direct feedback from diners about how they liked the meal. But what he’ll do with the input may be an open question. In response to several diners who said they loved the fried chicken, but thought it might have been overwhelmed by the oyster mayo, Syhabout shrugged: “Cooks eat different from the general public.”

Syhabout said he plans to offer Box and Bells pop-ups every few weeks at Hawker Fare. On Thursday, he announced dates of March 3 and March 17. Tickets are $45, and do not include service fee, tax, tip or beverages. Stay tuned to the Box and Bells Twitter feed for more news.