Update, 3:50 p.m. Eight people are at least temporarily without homes after their building in the 2500 block of Shattuck Avenue in Berkeley caught fire Friday afternoon, authorities said.

Deputy Fire Chief Avery Webb said firefighters were dispatched just before 2:30 p.m. for a report of a fire in a basement at 2526 Shattuck.

As it turns out, the building has no basement. Firefighters arrived to find heavy smoke pouring out of the attic space of the two-story building. Due to the building’s “balloon construction” — which is known for its lack of “fire breaks” inside — they believed the fire would spread quickly, said Webb.

“It spreads extremely fast in places you can’t see it,” he said, such as in walls, floors and ceilings.

Due to the rapid spread, firefighters called for a second-alarm assignment. Residents who live on the second floor of the building, which has three commercial businesses on the ground floor, had already evacuated.

Initially, again due to the fire’s rapid pace, Berkeley Fire called for a third-alarm assignment, which would have brought in a crew from Oakland. But Berkeley firefighters were able to get the blaze, which was mostly confined to the north side of the building, under control before the Oakland team arrived, said Webb. It was declared under control at 2:54 p.m. (Continue reading after the photo gallery, which features images from local photographer Pete Rosos.) 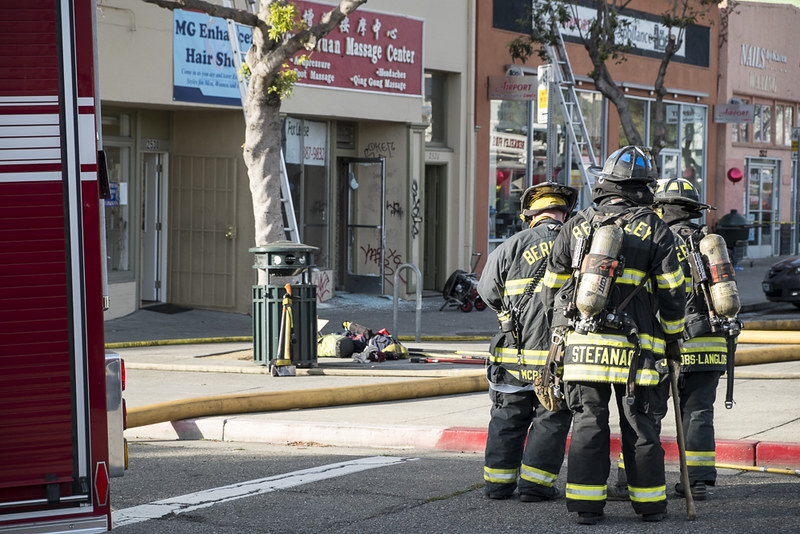 PG&E responded to the scene to shut off gas and electric services, and the American Red Cross is responding to help find housing for the eight displaced residents, Webb said.

The building to the north has a cinder block wall that was scorched in the fire, but otherwise did not appear to have been damaged.

No information on the possible cause or the extent of the damage is available at this time.

There were no reported injuries though, when fire crews initially arrived, they were told a cat may have been left inside the building in one of the apartments.

“As far as I know, everything’s fine with the cat,” Webb said.

Update, 3:30 p.m. Berkeleyside has received an unconfirmed report that the fire is under control. We’ll confirm with authorities as soon as they are available.

Update, 2:47 p.m.: According to Yelp, MG Enhancez Hair Shop is located at the 2530 Shattuck Ave. building that’s on fire.

Local resident Mark Coplan called in to report that he saw 15 pieces of equipment there: “I’ve never seen so many in one place.” He said smoke was coming out of the roof of the corner building.

Original post, 2:43 p.m. Berkeley firefighters are on the scene for what was upgraded to a three-alarm fire in the 2500 block of Shattuck Avenue, between Dwight and Blake, officials said.

Deputy Fire Chief Avery Webb said the call initially came in as a fire in a basement at about 2:24 p.m.

It’s a two-story structure with residential over commercial, he said.

“People are fighting the fire at all levels,” said Webb.

The building has been evacuated as far as firefighters know, though Webb added that it hasn’t been given the “all clear” yet.

This story was updated as additional information became available. We always appreciate breaking news tips and photographs via email (tips@berkeleyside.com), or on Twitter and Facebook.