A time capsule discovered last week during the demolition of a Berkeley community church included a carefully wrapped 1875 family bible from one of the church’s founding members, newspaper articles about the church groundbreaking in 1948, and several other related records, such as a church history and roster, published sermons related to the founding pastor, and an architectural flier about the building. Several pro-temperance fliers written by the pastor, seemingly in support of an election coming up around the time of the church’s construction, were also among the contents.

Pastor Leonard Nielson, of the Presbytery of San Francisco — which is based in Berkeley, oversees about 77 Bay Area churches, and was the former property owner of the church — opened the time capsule Monday after it was given to him by developer William Schrader Jr. Schrader is constructing a new apartment building on the site of St. Paul’s Church, at 2024 Durant Ave., where the time capsule was discovered by construction workers last week.

Schrader has plans to put the box, with modern contents, back into the new Durant apartment building behind its original cornerstone from the church.

Have ideas for what to include in the new time capsule? Share them in the comments section below. Schrader says he will consider all suggestions.

In addition to the reburial of the time capsule, Schrader said he plans to install the historic church cornerstone on the site of the new apartments. He also plans to incorporate the church’s large copper steeple as public art, part of the landscaping on the property. He hopes those efforts will serve as a way to help carry some of the past forward, he said.

“I just think you should connect the past to the future if you can do it somehow,” he said. “That building didn’t have anything really distinctive other than this beautiful copper steeple. I don’t want to just sell it and see it get melted down.”

The copper box, measuring 10 inches long by 8 inches wide and 8 inches tall, had been soldered shut to be completely air- and watertight, said Nielson. He took the box home and opened it carefully so as not to damage it, he said.

In addition to the items described above, Nielson said the box also included a 1926 book of government for the denomination, a bulleted short history from the church’s founding in 1945 until its groundbreaking in 1948, bylaws of its incorporation, and some programs from the groundbreaking ceremony itself, which mentions the time capsule and its contents. 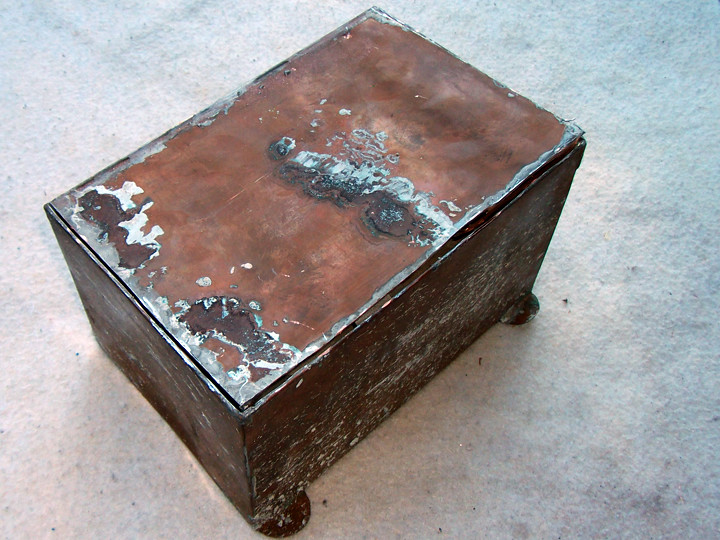 As part of his job, Nielson works with the presbytery’s 35 or so small churches, and is the pastor at one of them, Christ Presbyterian Church in San Leandro. A contractor and architect by trade, he oversaw the sale of St. Paul’s, and handles other types of financial issues and transactions for the presbytery.

According to Nielson, St. Paul’s Church was initially founded in a denomination called the United Presbyterian Church of North America. It was, apparently, the only church in Berkeley of that particular denomination, “which explains why they founded it,” he said.

In 1958, the denomination merged with the larger United Presbyterian Church in the United States of America, which already had three churches in Berkeley at the time. That’s “also why it eventually dwindled,” said Nielson, due to “too many churches of the same denomination in Berkeley.”

Those two denominations had split over slavery during the Civil War and didn’t reunite for 120 years, he added.

The founding pastor of St. Paul’s, Frank Shunk Downs, had been president of the California Temperance League, as well as a local preacher. Several of his tracts were included in the time capsule: “What the Bible says about Social Drinking” and “Liquor at the Bar of Judgment.” Nielson said the second item appeared to be an informational campaign flyer for a vote on temperance that was held in California in 1948, noting, “which I guess didn’t pass. Lots of local color.”

Nielson shed further light on how the church would have come about during a phone call last week, indicating that people from Berkeley who were settling down after World War II would have been its founders.

For many years, it wasn’t uncommon for small community groups of anywhere from 30-100 people to get together to build a church on their own, with financial help from the presbytery, he explained.

“It probably never drew from more than eight to 10 blocks,” Nielson said. “It’s a slice of time that just isn’t like that anymore. A lot of churches were built right after the war, with people coming home, fascism having just been defeated. These were first-generation suburbs.”

He said that after the church closed in the 80s, the Presbytery of San Francisco had its offices in the Durant Avenue building, but had not been aware of the time capsule hidden in its walls.

“It’s a story about a particular time that doesn’t exist anymore, how people lived in neighborhoods,” he continued. “The church was a big social connection in those days. You can look at the time capsule and realize the whole story of how that little teeny church got started. These little churches were built with enthusiasm and a very, very local connection. They think their children will go, but often the children move away. It’s like the mom-and-pop stores that are disappearing as the neighborhood and culture changes.”

Speaking generally about small churches, he described their founding boards as “the caretakers of the local story of that church,” and said it’s not uncommon for that history to be lost overtime, particularly as churches close.

“There usually isn’t anybody left that has a connection to the history,” said Nielson, once churches close. “It’s kind of like old people who have a story to tell but, if nobody’s willing to listen, nobody knows the story.”

Closures can happen when denominations get too small, when neighborhood demographics shift, or if newer facilities become available in the vicinity.

He said it’s definitely “not uncommon” for old buildings to have items hidden on site, or features that have been forgotten about after renovations. During other projects, he’s found old coins stashed in the wall; a Depression-era cabin’s original wall that had been sealed over with Collier’s magazines and wallpaper glue and varnish before, much later, being covered over by drywall; 100-year-old empty milk bottles that had been sealed up in a stairway — “probably tossed under there by some workers at lunch”; and a labyrinthine 2½-foot crawlspace between a historic school building’s original 12-foot ceiling and the more recent ceiling that had been installed below it. Nielson also noted the discovery of a time capsule found during sidewalk construction at a Montclair church.

“There’s never anything of extreme value,” he said, of the time capsules. “They’re kind of saying, ‘We were here and here’s who we are.'”

Despite that, Neilson said seeing the box’s contents is still quite meaningful.

“I don’t know these people but we open it up and get a little touchstone of who they were,” he said. “I’m really glad Bill found it, just to have a connection to those folks and the layers of Berkeley history.”