UC Berkeley has begun the process of removing dozens of trees from its University Village property in Albany as work begins on a vacant lot slated for development that has been the site of numerous protests in recent years.

University spokeswoman Christine Shaff said Thursday afternoon by email that 53 trees will be removed from the property, on San Pablo Avenue near Monroe Street. Those trees will be replaced on a 2.5-to-1 basis, she added.

The project, which received formal approval last year from the Albany City Council “will bring senior housing and retail, including a grocery store, to serve nearby student-family housing as well as the Albany and west Berkeley communities,” Shaff said.

With building plans and permitting reaching final stages, construction could begin within the next few months.

The work began Thursday with the removal of trees and other vegetation in areas slated for development.

Shaff described the University Village mixed-use project as one that was “collaboratively planned with extensive community input over the past eight years.”

In 2012, however, an activist group called Occupy the Farm took over the property in April to dispute the project and push for the parcel to become an urban farm and protected open space in perpetuity. The group focused its occupation on an agricultural research field north of the parcel slated to become a grocery store. The university has said previously that its goal is to leave that field as open space. 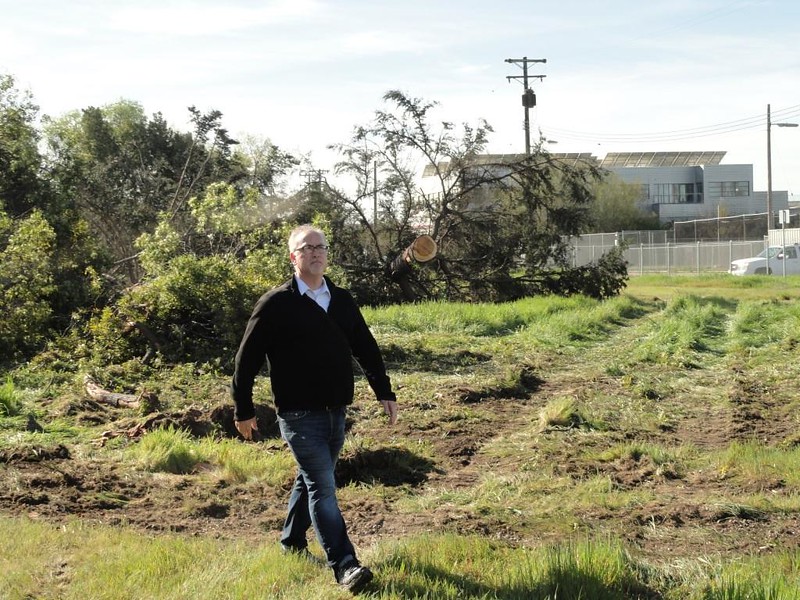 Shaff said Thursday that, of the 53 trees being removed, “approximately one-third of them are small trees with a trunk diameter of 12 inches or less. Three oak trees will be relocated and landscaping plans for the University Village Mixed Use Project call for planting 154 new trees overall including seven new oaks.”

The project also includes construction of new walking and bike paths. The landscape plans are posted on the city of Albany website, which includes project descriptions, other details and related documents.

Read about the site’s development to date and opposition from Occupy the Farm.

Shaff said the project “has many benefits, including new senior housing opportunities for Albany residents, UC retirees and others, allowing them to remain in the community as they age; new affordable retail services within walking and biking distance for University Village residents and nearby neighbors; generation of nearly $1 million annually in ground lease revenues for the University that subsidize rents for low-income students living in  University Village, Albany residents, as well as provide funding for the College of Natural Resources that will help support its programs related to urban farming.”

Occupy the Farm called for a protest on Sproul plaza at UC Berkeley at noon Thursday after the trees were cut down, but one witness who attempted to attend the event said, as of 12:40 p.m., it had “failed to materialize.”

Update, 7 p.m. Occupy the Farm sent out a statement Thursday about the trees UC Berkeley had cut down Thursday morning.

According to the group, the action “came as a shock to farmers and neighbors, as there is an active lawsuit on appeal in the county courts, contesting the development’s detrimental environmental impact.”

The statement continued: “Knowing the community would mobilize to defend the trees, the UC hired a huge demolition team, cutting down the trees with lightening speed. The last trees were in the process of being destroyed at 9am, as farm supporters arrived.”

The group said some people rallied Thursday in front of Capital Projects, part of UC Berkeley’s real estate division, and that supporters planned to meet in Albany on Thursday at 5 p.m. “to hold space for grieving the loss of the historic arboretum, and discussing next steps. ”

See UC Berkeley’s website for the mixed-use project at University Village, along with a city of Albany newsletter that featured the project last year.

Get the latest Berkeley news in your inbox with Berkeleyside’s free Daily Briefing. And make sure to bookmark Berkeleyside’s pages on Facebook and Twitter. You don’t need an account on those sites to view important information.