Irish President Michael Higgins visited Berkeley on Wednesday to thank first responders for their compassionate response to the tragic balcony collapse in June that killed six and injured seven young students, most of whom were part of the J-1 cultural exchange program with Ireland.

Higgins later joined Berkeley Mayor Tom Bates to plant two arbutus trees in Civic Center Park as a symbol of the connection that has grown between the city and Ireland in the months that followed the fatal accident, and as a memorial to its victims.

A private reception to honor first responders and others in Berkeley who sprung into action after the balcony collapse was held at the Hotel Shattuck Plaza on Wednesday afternoon.

Philip Grant, the Irish consul general who is based in San Francisco, said Higgins was in frequent contact after the tragedy with Grant’s office, as well as with the families of those who were injured or lost their lives when a fifth-floor balcony collapsed at the Library Gardens apartment complex in downtown Berkeley on June 16.

“The people in this room made the impossible possible,” he told the president, “and we are very honored that you are here to honor those who honored us.”

Grant said he also wanted to pay tribute to the J-1 students who were at Library Gardens when the balcony collapsed, as well as others who rushed to the scene to offer assistance and support.

“When we needed to know who was where and how they were, you were our lines of communication,” Grant said. “You are not here today but you are here with us in our spirits.”

President Higgins thanked the community of Berkeley, and its first responders in particular, for their efforts following the balcony collapse. He said police and firefighters offered “practical, psychological and spiritual support” to the victims of the accident, as well as to their families.

“In the blink of an eye, these young, talented and bright students, most of whom were thousands of miles from home, and their families and friends suddenly needed the compassion and intensive support of strangers,” Higgins said. “You did not fail them. Your actions gave such powerful definition to the term ‘hospitality.'”

He said he and his wife, Sabina Coyne, who also was in attendance, had wanted for months to make the journey to Berkeley, and said the tragedy had been deeply felt in Ireland.

“We know that it has affected you also,” he told the hundreds in attendance, which included many of Berkeley’s police and firefighters. “We join you today in solidarity and thanks for what you have done to help those who have suffered so much as a result.… Some here were the first to respond to their calls, the first to reach their side in the awful aftermath of the balcony collapse. It was for them to tend to the dying and the injured and to carry them to where they needed to be.”

He also thanked local first responders for creating a “refuge” where friends of those who were killed and injured could receive counseling and support and be reunited with their families.

“Particular help was required for the families and friends of those whose lives had been lost,” Higgins said. “You became the pillars of that support.”

He said first responders helped arrange for the return to Ireland of the remains of the students who died, and thanked workers in local hospitals who had tended to the injured.

“No one spared any effort to help repair what could be fixed,” Higgins said. “The wards were always open to the families, friends and volunteers — those who stood vigil from that first night to the time, three months on, when the last of the injured students was able to make the journey home.”

He also noted that Jackie and George Donohoe of Rohnert Park, whose 22-year-old Irish-American daughter Ashley died in June, were in attendance Wednesday. The others killed in the balcony collapse were Donohoe’s cousin, Olivia Burke, and Eimear Walsh, Eoghan Culligan, Nick Schuster and Lorcán Miller, all 21 years old and from Dublin.

Higgins recognized the efforts of Consul General Grant and the rest of the consulate staff, along with the Bay Area’s Irish community and Fr. Brendan McBride of the Irish Immigration and Pastoral Center of the Bay Area.

Recalled Higgins, “At the month’s mind remembrance service in July, Fr. Brendan spoke of the ‘energy’ that the hundreds of Irish students bring to the communities of the Bay Area every summer, especially here in Berkeley. He spoke movingly of the six students who lost their lives so tragically and he promised that they will ‘be a beacon for all who follow them for the succeeding summers.'”

Higgins said the people of Berkeley had lived up to the city’s motto of “Fiat lux,” or “Let there be light.”

“I see gathered here the custodians of that light and the keepers of that beacon – the police, the firefighters, the medical teams, the volunteers, the people of Berkeley and their neighbors. You can all be assured that through the humanity and compassion of your actions on 16 June and since then, you have made a most terrible event more bearable,” he said. “For this you have my deep gratitude and that of the Irish people. Our bonds of friendship are made stronger by shared pain and loss, but they will also join us together in happier times to come in the future.”

Before departing with President Higgins to Civic Center Park to plant twin arbutus trees in honor of the victims of the June tragedy, Mayor Bates took several minutes to thank the city’s first responders.

“You were there for them and I just can’t say … how proud I am of you and what you’ve done for our city,” he said.

Bates said the Berkeley City Council is doing “everything we can to make sure this never, ever happens again” by adopting legislation to ensure that inspectors keep a close eye on new balcony construction, along with other weather-exposed elements, and that they inspect those elements periodically in the future.

“This event is not going to go unnoticed,” he said of the June balcony collapse. “This is going to change the way we do business in Berkeley.” 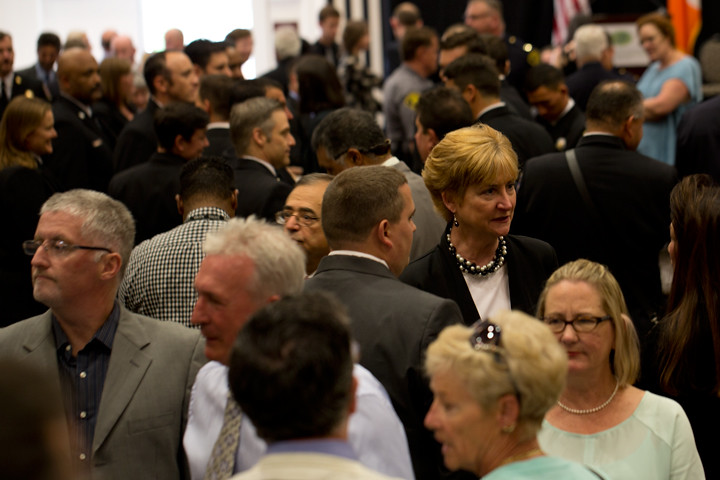 Get the latest Berkeley news in your inbox with Berkeleyside’s free Daily Briefing. And make sure to bookmark Berkeleyside’s pages on Facebook and Twitter. You don’t need an account on those sites to view important information.