Attorneys for the city of Berkeley have asked a U.S. District Court judge to reject a wrongful death lawsuit filed in 2014 by the father of a transgender woman who died in police custody in 2013.

Representatives for both parties are expected to appear in court Friday morning at the Phillip Burton Federal Building in San Francisco. If the case moves ahead, the trial itself has been scheduled to begin Oct. 17, according to materials from lawsuit supporters.

Kayla Moore, a 41-year-old Berkeley resident, was in her Allston Way apartment Feb. 12, 2013, when police responded to a disturbance call there, authorities have said. She stopped breathing during a struggle as officers tried to detain her. The Alameda County coroner’s office said Moore — whose given name was Xavier — died due to “acute combined drug intoxication” and pre-existing medical conditions, and ruled her death an accident.

The city filed a motion for summary judgment in June essentially arguing that the family has neither the evidence nor the facts to back up the wrongful death suit. The city says officers used “minimal force” and have “qualified immunity” under the law as to the force they did use.

Oakland attorney John Burris, whose firm is representing Kayla’s father, Arthur Moore, has argued police had no cause to arrest Moore and “used unreasonable force” during the arrest.

To bolster the case, Burris has filed a declaration by Dr. Werner Spitz, a forensic pathologist who has worked on a variety of high-profile cases in recent decades. Spitz said restraint by the officers made it difficult for Moore to breathe and contributed to her death.

Spitz testified at the trials of Casey Anthony and Phil Spector, and in the civil case against O.J. Simpson. He consulted on the investigation into JonBenét Ramsey’s death and also worked on the investigations into the assassinations of president John F. Kennedy and Martin Luther King Jr., according to media reports.

According to the Spitz declaration, he has performed or supervised about 60,000 autopsies.

Spitz reviewed the autopsy performed on Moore and concluded — counter to the coroner’s report — “that even the combined effect of the drugs … would not have been fatal.” He said Moore, who weighed nearly 350 pounds, could not get enough oxygen because of her position handcuffed on a soft mattress, at times on her stomach, during arrest. Spitz said the position of officers during arrest was also a factor.

(Moore identified as female, using the name Kayla, but many of the official documents, including the Spitz declaration, refer to her as male and use her given name, Xavier.)

“It is my opinion that the death of Xavier Moore was the result of the combined effect of the restraint, which compressed his diaphragm and interfered with his respiration, and the preexisting enlargement of the heart,” according to the declaration. “Xavier Moore’s death was caused by oxygen deprivation. When the officers got off of him, he was having trouble breathing and died within a minute.”

The city has countered that the Spitz declaration is not based on any evidence and should be excluded, adding that “Expert opinions that are merely conclusory assertions, unsupported by specific facts, are inadmissible.”

City attorneys have described Moore, on the night of her death, as “paranoid, delusional, and agitated,” and said she met the criteria for being taken into custody for a psychiatric evaluation, according to court papers. She had moved into her downtown Berkeley apartment the prior October, about four months earlier.

An expert for the city, Dr. Gary Michael Vilke, offered a different set of opinions, writing in court papers that “the restraining process did not cause the sudden cardiac arrest and death” of Moore; that “the actions of the officers did not cause or contribute to the sudden cardiac arrest and death” of Moore; and that “The cardiac arrest of Mr. Moore was most likely caused by his underlying enlarged heart coupled with an intramuscular left anterior descending coronary artery, methamphetamine use and his agitation.”

Accounts differ as to what exactly took place during Moore’s arrest.

According to the city, “No officer ever placed his or her full body weight on Mr. Moore’s back in any manner that could have obstructed his breathing.”

According to the recollection of one BPD officer, Sgt. Amber Phillips, Moore “was violently kicking and moving about” during the arrest attempt, and “his back was fully exposed, so I know for a fact that nobody was sitting on his back or anything like that.”

Phillips also recalled the final moments in Moore’s apartment, as recorded in her deposition from July 2015: “Officer Brown was yelling to Xavier, ‘Xavier, are you okay?’ He took a deep breath, and then appeared to stop breathing, and I said — we said, take the handcuffs off. Immediately the handcuffs came off, and she checked for a pulse, and said, ‘I don’t think he’s breathing.’ And so then I got back on the radio and said … we’re starting CPR.”

The plaintiffs, on the other hand, argue in court papers that “at least four officers had their weight (totaling over 600 lbs) on Decedent’s body.… In fact, the Defendant Officers used a severe level of force against Decedent Moore by heaping their collective weight on him,” pinning down Moore’s limbs while she was prone.

Their opposition to the motion for summary judgment continues: “The Decedent’s underlying crime was minimal, as he allegedly had a disagreement with his roommate and he was intoxicated within the confines of his own home. He did not pose a risk to the safety of the officers because Officer Brown was able to speak with him for 15-20 minutes without mention of any harm or danger.”

They write, further, that Moore was a paranoid schizophrenic who was entitled under state law to a verbal or written advisement explaining that she was being taken for a psychiatric assessment and was not under arrest.

The city argues that the responding officer spent 15-20 minutes trying to talk Moore into allowing herself to be taken into custody and that no city mobile crisis workers or BPD Crisis Intervention Team officers — who have more specialized mental health training — were on duty due to the late hour.

Defendants named in the suit include the city of Berkeley, along with BPD officers Gwendolyn Brown, Kenneth Tu, Brandon Smith, Brian Mathis, Tim Gardner and Nikos Kastmiler, and BPD sergeants Phillips and Benjamin Cardoza. (Read excerpts from their depositions.)

According to court papers filed by the city, Moore never said she could not breathe or that officers were choking her: “Once Mr. Moore was placed in two sets of handcuffs to allow more room for him, he continued to buck and kick at the officers, so Officer Mathis placed a Velcro ankle strap around his ankles. Even this did not end Mr. Moore’s resistance. Once he stopped resisting and kicking, the officers placed Mr. Moore on his side into a recovery position and monitored his breathing.”

Under the law, the city says, the plaintiff must show that officers had a “purpose to harm” unrelated to any law enforcement objective. The city argues there is no evidence of that.

“The unfortunate fact that Mr. Moore died after the struggle he precipitated due to his pre-existing heart condition and toxic levels of methamphetamine in his system has no bearing on the reasonableness of the officers’ response,” the city writes.

The defense team has raised questions, too, about a warrant found by dispatch for an “Xavier Moore” as officers were responding to the scene, and have questioned what role that warrant played in police decision-making. According to court papers, the San Francisco warrant was for a different person named “Xavier Moore,” which Burris says was known to officers prior to detention. 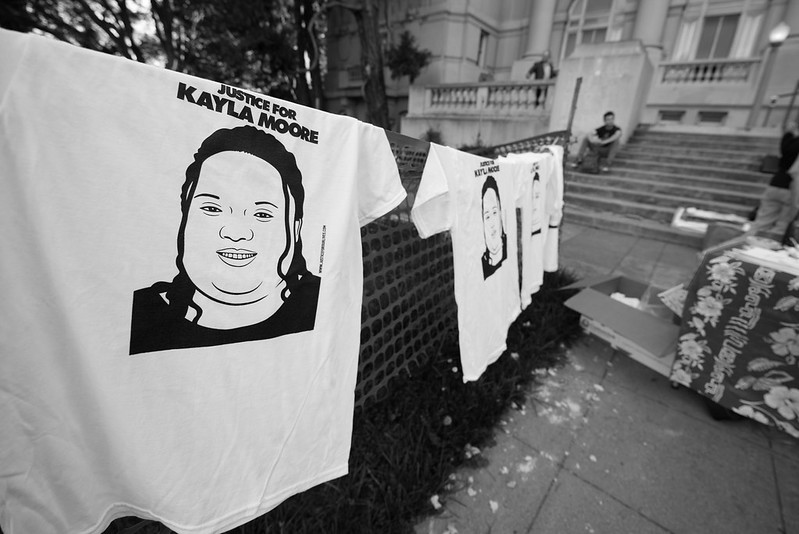 Friday’s hearing follows a march and rally in Berkeley earlier this week when an estimated 75-150 people came together in support of the Justice 4 Kayla Moore Coalition. (See the photo gallery above.)

According to a statement released this week by the group, the coalition is seeking “a just judgment in court” and “changes in Berkeley city policies.” It has decried what it describes as “the city’s ongoing practice of prioritizing funding for violent, ableist, transphobic and racist policing instead of mental health care and community services.”

The coalition has said the city needs to put more money into mental health services — including “community­-run mental health care” and “a 24/7 civilian­-run crisis response” — which it could pay for by reducing the police department’s budget.

In an op-ed published on Berkeleyside earlier this year, Maria Moore, Kayla’s sister, said her sister’s death is emblematic of a much larger problem that has national ramifications.

“The reality is the mentally ill are at higher risks of being victims of violence than the perpetrators, and those with mental illness are four times more likely to die in encounters with police as compared to the rest of the population,” she wrote. “African Americans, transgender women, and the mentally ill are killed at an alarming rate due to police encounters. It truly is a national crisis.”

During his April 2016 deposition for the lawsuit, Moore’s father, Arthur, said he blames the police for his son’s death. He said he’d had to stop working after Xavier died because he was so distraught, and believed six officers had been on top of Xavier at once shortly before he died. Arthur Moore said he couldn’t recall who told him this, according to the deposition transcript, and had no personal knowledge of the allegation.

“Let’s put it this way: You can kill or murder somebody not intentionally, but it can be done. And I think in this case that was done,” he said, according to the deposition transcript. “When these officers came to my son’s house, he opened the door and he was alive; and when they left, he was dead.”

Friday’s hearing is slated to take place at 10 a.m. at the Phillip Burton Federal Building in San Francisco, 450 Golden Gate Ave., Floor 17, Court 6 before Judge Breyer. Supporters of the suit plan to gather at 9 a.m. to share coffee and food, and plan to wear purple to make their position clear.

If you rely on Berkeleyside, help support independent local journalism by becoming a member today.