Yes, I’ll chip in to support your work!

For updates on the #NotMyPresident protest march that began at UC Berkeley and moved through Oakland, follow Berkeleyside’s tweets.

Wednesday, 1:10 a.m. The vast majority of Berkeley precincts have now been counted and the shape of the local election is largely clear. Jesse Arreguín will be Berkeley’s new mayor, the first Latino to hold the post. Sophie Hahn wins the vacant District 5 seat, Ben Bartlett wins the vacant District 3 seat, and incumbent Susan Wengraf retains her District 6 seat. Incumbent Darryl Moore is in a precarious position in District 2: his 40% of the vote forces him into an instant runoff against second-place challenger Cheryl Davila. A special election will be held early next year to replace Arreguín in District 4.

It seems likely that Berkeley progressives, led by Arreguín, will hold a City Council majority for the first time in years.

Nine of the 12 Berkeley-specific ballot measures passed. Only measures BB and CC – the two minimum wage measures rendered obsolete by the City Council’s late passage of a minimum wage ordinance – and Measure DD failed. The contest between DD and U1 – rival measures on taxing of residential rental units – was one of the costliest in Berkeley history. Despite the hundreds of thousands spent against U1, it garnered 74% of the vote. DD was opposed by 71% of voters.

The school district’s Measure E1, for the renewal of BSEP, easily crossed the two-thirds threshold for passage, with 88% support.

Update 12:45 a.m. Berkeleyside’s Emilie Raguso is on the scene of the protest march that has taken people, many of them students, from Berkeley south on Telegraph to the 56th Street ramp of Highway 24 in Oakland. She reports that a person was hit on the freeway. Follow her live tweets at @Berkeleyside (You don’t need a Twitter account to do so.) Raguso estimates 100-200 people are involved in the protest. They are in the Temescal area of Oakland.

Update, Wednesday, 12:30 a.m. The protest march that started in Berkeley is now around 59th and Telegraph in Oakland, according to Berkeleyside’s Emilie Raguso who is on the scene. Several dozen people, some wearing Cal gear and who appear to be students, are walking back north toward Berkeley from the area of the freeway entrance at 56th. Protesters are not letting people get on the freeway.

Update, Wednesday, 12:02 a.m. A group estimated to be 200-strong is marching through the streets of Berkeley chanting “Not my President” and “Fuck our President.” A few minutes ago the protest was on Telegraph passing Ashby heading south towards Oakland. Berkeleyside confirmed with BPD who are on scene managing the march. Helicopters are overhead.

Update, 11:50 p.m. Just before midnight, with 60% of precincts counted, just about the only race in Berkeley that remains in doubt is District 3, where incumbent Darryl Moore has just over 41% of the vote. Cheryl Davila is in second with 32%, and Nanci Armstrong-Temple in third with 26%. The result will be determined by ranked-choice voting if no candidate can draw a majority.

Jesse Arreguín is looking in a very strong position to take the mayorship after ranked-choice voting is implemented. Sophie Hahn is heading for a large win in District 5 over Stephen Murphy and Ben Bartlett looks to have a comfortable majority in District 3, replacing Max Anderson. There will be more votes counted later this week and through Monday so we won’t have official, final numbers until after that.

We have collated some photographs being shared with us from contributors Kelly Owen, Pete Rosos, Ted Friedman, Frances Dinkelspiel and Natalie Orenstein. Click through the slideshow, using the arrows on either side, to see the photos below: 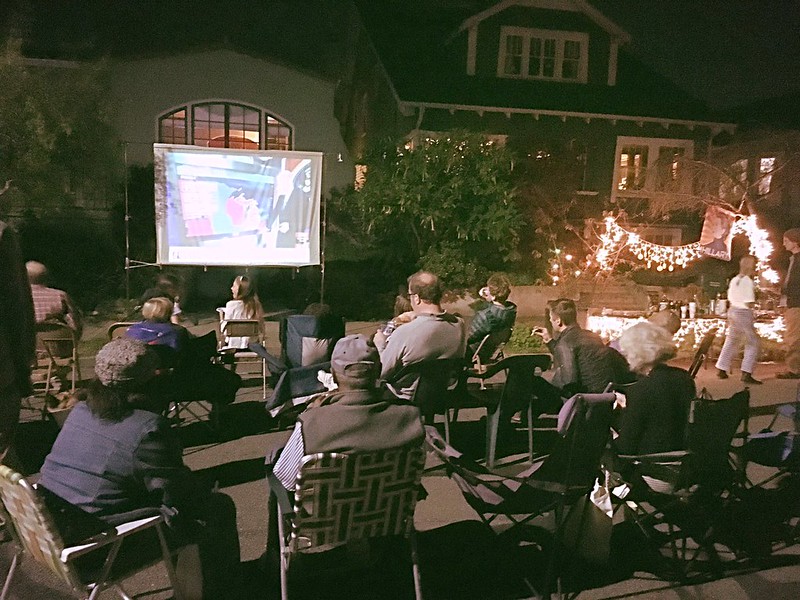 Over at Cheryl Davila’s campaign, according to an email from Noah Sochet, they’re feeling “devastated about national politics but tentatively very hopeful about Berkeley’s election results.” See two photos below.

Update, 11:43 p.m. With nearly 60% of precincts counted, Jesse Arreguín has slightly increased his lead in the mayoral race. With Arreguín so close to 50%, it seems highly likely second-choice votes from progressive ally Kriss Worthington will put him over the top through the ranked-choice voting instant run-off.

Update, 11:38 p.m. In a speech earlier tonight, Jesse Arreguín — in the lead for mayor — said of the Trump win, “We may be entering into dark times.” Hear his speech below.

Update, 11:30 p.m. Mayoral candidate Laurie Capitelli on the mayor’s race. Capitelli said, if the current trend continues, it looks like Arreguín will be mayor, and that said Arreguín and Worthington’s strategy regarding ranked-choice voting worked.

Update, 11:24 p.m. Here are the latest standings. We’ve added in information about how many precincts have reported.

A Berkeley High School student contacted us by email to say that, “In the event Donald Trump is elected president, students at BHS are planning to dress in all black tomorrow to present a unified front against the hatred and division his candidacy represents.” The student signed off, “A Concerned Citizen.”

Update, 11:15 p.m. Nearly 40% of precincts have reported now and the last results are beginning to look baked in. Jesse Arreguín still leads the mayoral count with 44% of the vote to Laurie Capitelli’s 38%. Measure E1 has 87% support.

Update, 11 p.m Frances Dinkelspiel caught up with retiring state senator Loni Hancock — pictured below with her husband Berkeley Mayor Tom Bates — at Laurie Capitelli’s campaign HQ and asked her about Trump’s likely victory. She said, “It goes back to Truman and Dewey. How could they be so wrong? No-one knew the depth of rage that people feel for many reasons in this country. The ones hurt by globalization, the ones hurt by diversity. There’s a lot to think about.”

Update, 10:40 p.m. With 22% of precincts reporting, the early trends on all the Berkeley measures are being reinforced. The BSEP renewal, E1, is looking comfortable with 87% approval so far (it requires a two-thirds majority to pass). The fear that the two minimum wage measures, superseded by City Council’s passage of a new minimum wage ordinance, would confuse people seems assuaged (both BB and CC are currently running at about two-thirds no).

Update, 10:37 p.m. New numbers are in from the Registrar of Voters and we are hurrying to get them all to you as soon as possible. Meanwhile, Frances Dinkelspiel is taking the pulse of a couple of people at the Laura Capitelli HQ about the presidential election which is looking like being won by Donald Trump. City Councilwoman Susan Wengraf said: “This is too disturbing for me. I don’t think anyone is prepared for this reality. Everyone in here is numb. Look at their faces. Everyone here is dumbfounded.”

And Capitelli’s campaign manager Jill Martinucci said simply: “I fear for my country.”

Update, 10:31 p.m. With 22% of the precincts reporting Jesse Arreguín remains in the lead, with Laurie Capitelli trailing by 5%.

Update, 10:26 p.m. Jesse Arreguín with Leah Simon-Weisburg and her family, below. She said, of the likely CALI win, “I’m happy and really proud. It really shows people paid attention.” She said the U1 lead shows that hundreds of thousands of dollars “of misinformation isn’t enough,” referring to the campaign to defeat it. As a Rent Board commissioner, she wants to “get rid of Costa-Hawkins, make sure teachers can afford to live here,” and develop land trusts.

Update, 9:57 p.m. Mayoral candidate Jesse Arreguín, at an election night party at the Ed Roberts Campus in Berkeley, talks about his lead in the mayoral race, U1, and what an Arreguín-led Berkeley would look like under President Trump. The audio follows. (Still no updates from the Alameda County Registrar of Voters in the local races since 8:15 p.m.)

Update, 9:50 p.m. Rent Board and School Board results so far: Incumbents Judy Appel and Beatriz Leyva-Cutler appear to have a lock on those seats. On the Rent Board, Leah Simon-Weisberg, Alejandro Soto-Vigil, Christina Murphy and Igor Tregub (the CALI Slate) are in the lead.

Update, 9:41 p.m. District 5 candidate Stephen Murphy, trailing Sophie Hahn by 700 votes (60% to 40%), with 2 precincts reporting, says he is disappointed he is trailing in early returns but it’s still too soon to call.

“I have a gut feeling (Arreguín) is going to win,” Gould said. “He has a strong, noticeable lead. It’s not what we would expect to see if Capitelli was going to win.”

Update, 9:20 p.m. Natalie Orenstein is reporting in from the watch party at La Peña Cultural Center. “There’s a packed crowd at La Peña, with eyes glued to PBS,” she writes. “Pizza and beer are for sale, and people are happy to indulge. Audience member Dalia Rivera told us: “We came here because we had hoped to elect a female president. Now it’s a little depressing. Trump has a real pathway at this point.” Rosemary Howley (pictured above), a singer in La Pena’s Community Chorus, said, “I’m horrified with the possibility that Donald Trump might become our next president. But the election is not over yet.” If he does win, those against him will have to figure out how to work against what he stands for, she said. “I shouldn’t be smiling this much in a picture,” she said.

“I thought we ran a great campaign,” Capitelli said to Dinkelspiel. “I thought we took the high road the whole time. We didn’t attack anyone else who was running. And we had an incredible group of volunteers.”

Capitelli’s campaign manager, Jill Martinucci, told Dinkelspiel that it wasn’t a great sign that the early vote count — which usually comes from the hills — favored Arreguín.

Update, 9 p.m. Listen to Sophie Hahn talking earlier this evening after positive, but early, results for District 5 began to come in. Despite her optimism about the local race, speaking about the national election results coming in, she said she was “devastated.” “I’m in a nightmare. Please wake me up.”

Update, 8:40 p.m. The scene at the Ashby Stage watch party when Hillary got some success a bit earlier. Natalie Orenstein, on scene for Berkeleyside, shared some observations: “Sparse crowd at the Ashby Stage, where they’re watching MSNBC. The mood is tense but the audience is more than happy to cheer when a state is called for Hillary Clinton. Joan and Iris Starr, who live in North Berkeley, came here to watch the 2012 results too.

“That was total jubilance,” said Joan. “Tonight is high anxiety,” said Iris. Megan Trout, an actor in the Shotgun Players company, got to the theater as fast as she could this evening. “Whatever the results end up being, I wanted to be in my community,” she said.

Update, 8:20 p.m. First results in with Jesse Arreguín on top for mayor. These are likely the mail-in ballots primarily.

Update, 8:02 p.m. We’re focused on local elections here, but let’s be honest. With everyone else, we’re transfixed (and horrified) by the national election coverage. Very depressed at Berkeleyside’s live blogging HQ right now.

Update, 8 p.m. Polls have closed and we’ll start having unofficial local election results soon. We’ll be getting them from the Alameda County Registrar of Voters office. See results online.

Original post, 4:02 p.m. As we’ve done in past years, Berkeleyside will post live election results as they come in. Coverage will begin around 8 p.m. right here, so bookmark this link and keep coming back. Refresh often for updates.

Some members of our team will be updating the blog, while others will rove the city to collect local reactions.

Know of a great watch party we should visit? Let us know in the comments, or email us.

If you haven’t voted yet, check out our Election Hub, and use the Voter’s Edge tool.