Update 1:45 p.m. The student protest on the UC Berkeley campus is disbanding.

Update, 1:20 p.m. The group of protesters that marched through downtown has headed on to the UC Berkeley campus, first through Sproul Plaza and then to the Campanile (pictured above), echoing the movements of Wednesday morning’s march. According to Berkeleyside’s Arielle Gordon-Rowe, many of the this group are from Albany High. A local attorney in the crowd spoke briefly at the open mic, imploring students to read Howard Zinn. Students demanded the teaching of African American and Native American history, as well as gay rights history, among other things.

We are also hearing reports from readers of separate groups of students in protest marches in North Berkeley. One group was seen on Solano and The Alameda heading to the Gourmet Ghetto.

Update, 1 p.m. Many Berkeley High student protesters are heading south down Shattuck Avenue in downtown Berkeley. Traffic is affected. According to Berkeleyside’s Arielle Gordon-Rowe many Albany High students walked over two miles from their school to join the Berkeley High walkout.  Albany High campus administration supported the students and some teachers joined in.

Update, 12:55 p.m. Many of the protesters took part in a silent sit-in at Sproul Plaza to support undocumented students, according to tweets from the scene. We had a change of shift after our reporter Tracey Taylor’s phone battery died. Arielle Gordon-Rowe headed there now to update us on the situation. Watch our Facebook Live coverage of much to Wednesday morning’s walkout from Berkeley High, march and protest on the Cal campus.

Update, 12:30 p.m. The protest that had gathered at the UC Berkeley Campanile at around 10:40 a.m disbanded just before noon with most of the students heading west. A Sproul Plaza protest of undocumented students was mentioned by one of the students on the open mic.

Update: 10:40 a.m. The 1,500 Berkeley High students who walked out of classes are now gathered at the base of the Campanile at UC Berkeley, according to Berkeleyside reporter Tracey Taylor. Many are chanting “Not our president.” They have been joined by a number of Cal students and are sitting on the lawn area and on the stairs at the base of Sather Tower. Students with megaphones are taking turns talking.

Update: 11:40 a.m. Apparently some students from Oakland Technical High School and Albany High are joining the protestors at Cal, according to one reader.

Original story, 10:32 a.m. Berkeleyside is currently on the scene of a walkout at Berkeley High School.

Watch Berkeleyside’s live coverage of the protest on Facebook live.

There is currently little police presence at the peaceful march.

“It’s shocking that America voted for this man,” said Gabby Klein, a 16-year-old junior. “He’s a racist, a sexist, a xenophobe. It’s one step forward and two steps back. We had Obama and now we have Donald Trump and Melania. It’s disgusting.”

“We’re all mad about Trump’s election. He doesn’t represent us,” said Timothy Marston, a 15-year-old Berkeley High sophomore.  “We need to fight the system.

Another Berkeley high student, Asia, a junior, said she was marching for her 8-year old brother, who will see a “sexist President.” When she was 8, Obama was elected, ushering in a period of hope. Now the president is Trump. “It’s a horrible influence, the things he has said. It’s not okay.”

Students gathered in the central courtyard of Berkeley High around 8:45 a.m. and listened to students express their concerns, said Charles Burress, a spokesman for the school district. They then left campus around 9:45 a.m. and started walking though Berkeley.

As much as the march was a protest of President-elect Trump, it was a march for students to pull together.

“We are here to show unity and to remind each other that not all is lost,” said Shoshanna, 13, a freshman at BHS.

We are here to remind each other that we stand together,” said Kate, 15, a freshman.

“I think the election has left a profound mark on history,” said Bobbie Reyes, UC Berkeley class of 2016 as she stood at the base of the Campanile with thousands of others. “I think it hit me when I walked into the elevator of my dorm and I saw a girl crying. We are here to live, and we shouldn’t be afraid of our leader… it’s really so crazy when people think their vote doesn’t matter.”

Reyes said there will be a gathering on the Cal campus for people of color at 8 p.m.

“I’m honestly just speechless,” said Meaghan Olson, a junior at Cal. When her Gender Studies professor heard about the protest she encouraged her students to join in. “I don’t understand why, even though he has done five things that would have ended [anyone else’s] career, he’s still in the race and he’s been elected president. ” Olson said her roommate and her roommates parents are undocumented and is afraid that something is going to happen to her family.

Not every Berkeley High student participated in the march. A group of BHS students that Berkeleyside met by the school said they were on a “student march to home.” They said they would “support it at home.”

Berkeleyside will continue to update this story as it unfolds. 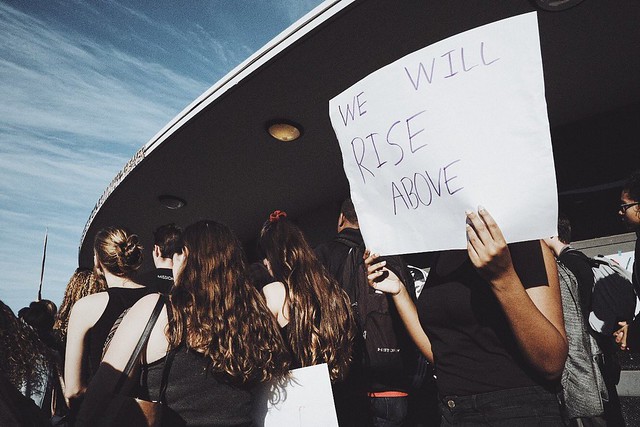