Berkeley High students formed their own kind of border wall Friday morning, only unlike the president’s theirs was designed to send a message of protection and support for their undocumented classmates.

Scroll down to see slideshow of photos by Pete Rosos.

Hundreds of students linked arms and encircled the entire campus, demonstrating solidarity with those affected by the potential end of an Obama-era program protecting young immigrants from deportation.

During what would be third period, around 10:30 a.m., the students poured into the courtyard for a quick rally in support of Deferred Action for Childhood Arrivals (DACA) recipients, led by student group Chicano Latino United Voices (CLUV). The student organizers then directed their peers to the edges of the campus, where they held hands and chanted, easily reaching all the way around the school.

“No ban, no wall, education for all,” was the cry. Some danced, many held signs with strongly worded messages for President Donald Trump, and all participated in a moment of silence. Cars driving by honked loudly in support.

The student organizers were inspired by a similar protest in 2008, when Berkeley High formed another human chain around the campus in a demonstration against Immigration and Customs Enforcement arrests involving a local family.

“We wanted to show people what a peaceful protest looks like,” said CLUV president Marielena Rodas, 17, after the DACA event. “This is how the kids do it.”

She said she has classmates who are struggling to focus on their schoolwork, knowing they, or their family members, could face deportation.

The CLUV organizers worked with Berkeley High faculty and administrators to plan the action over the past week. Principal Erin Schweng said she helped facilitate the event in part to make sure it went smoothly and safely, but also because she empathized with the students’ message.

“We do stand in support with them against the fear that the decision [to end DACA] caused,” Schweng said. She was pleased the students wanted to organize an event on campus involving the student body, in an action “that shows unity and hope.”

DACA allows undocumented immigrants who were brought to the U.S. when they were children, and who are currently in school or have a high school diploma, to stay in the country and work. Around 800,000 young people have received protection through the program, including more than 200,000 in California. Earlier this month, Trump announced his plan to phase out the program in six months, prompting protests around the country. On Thursday, however, Democratic leaders announced they may be close to reaching a deal with the president to protect DACA “dreamers” while boosting border security.

Shortly after Trump announced his intention to end DACA, Berkeley Unified leaders put out a statement in support of  affected students. Student immigration status is not tracked by the district.

Scroll through the slideshow of photos below: 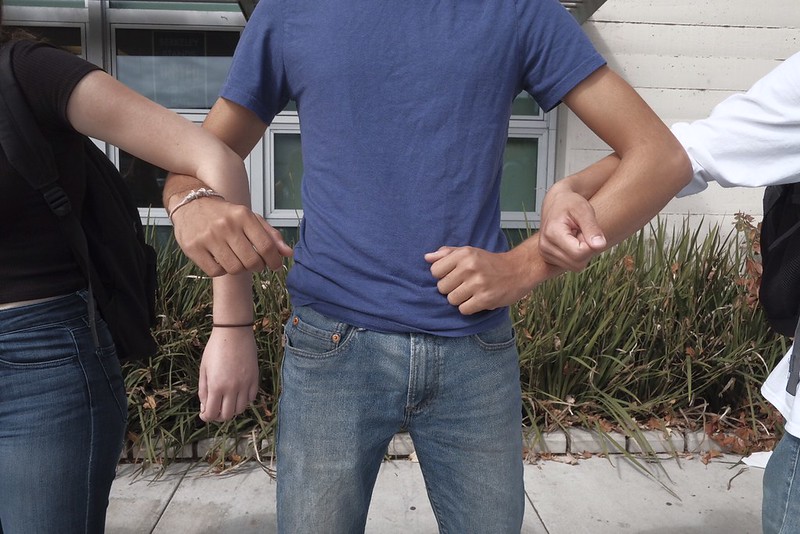 Natalie Orenstein reports on housing and homelessness for The Oaklandside. She was previously a reporter for Berkeleyside. Email: natalie@oaklandside.org. Twitter: .