Berkeleyside reporters and photographers were on scene at Telegraph Avenue and Bancroft Way for a planned appearance in Berkeley by Milo Yiannopoulos and supporters, along with counterprotesters.

5 p.m. See the Berkeleyside overview of the day.

2:25 p.m. Streets are now open. “Based Stickman” Kyle Chapman and friends are giving a pep talk to the 30 or so people left south of campus. UC Berkeley says Sproul will remain closed for at least one more day. In other news, Amber Cummings had promised to hold her own rally at 3:30 p.m. at Civic Center Park. Our team will post updates if there’s anything notable to report. Signing off for now.

2:10 p.m. UC Berkeley representatives say what drove the decisions and preparations Sunday was safety, vs. facilitating the event — because Milo was not a sanctioned event organized in close collaboration with students. “That’s why this was very different than the sort of event you saw with Ben Shapiro,” university reps said.

“There is a sense of relief. Now we want to move on with the rest of the semester,” said Dan Mogulof, UC Berkeley spokesman, at the end of the press conference.

1:55 p.m. “He left on his own,” says UCPD Chief Margo Bennett, of Milo Yiannopoulos. “We don’t know why they decided to stop speaking when they did.” Dan Mogulof, UC Berkeley spokesman, says it was a “safe space” inside the Sproul perimeter.

UC Berkeley said it’s not sure what the rest of the week might hold. “We going to be ready tomorrow if necessary,” Bennett said.

A group called the “United Against Right Wing Violence Media Committee” says a noon rally Monday at the crescent lawn “will move forward as planned.” See the group’s full schedule.

Police made a detention at Telegraph and Durant avenues shortly before 2 p.m.

1:47 p.m. “There were no injuries, few arrests,” says UCPD Chief Margo Bennett. Watch the live press conference. There was one arrest in connection with amplified sound. UCB estimates costs at $800,000. Dan Mogulof, UC Berkeley spokesman, called the Milo event the most expensive “photo op” ever.

1:18 p.m. A march is now underway down Telegraph Avenue and up Durant Avenue. Refuse Fascism members are chanting the loudest, but some on the right are also in attendance. Berkeleyside’s Natalie Orenstein estimates the crowd size at 100.

Refuse Fascism and the right marching in the same direction #Berkeley https://t.co/RQQxNEQOyz

Chants of "USA!" and "Commies go home" up Durant to counter "No ban, no wall." Strange scene of both sides marching in the same direction pic.twitter.com/HwnyGjxWUp

Says UCPD, “There are still crowds near Sproul Plaza and Bancroft and Telegraph. Continue to avoid the area. Pedestrian and vehicle traffic are impacted.”

1 p.m. UCPD reports that “the scheduled Sproul Plaza speeches have concluded and the scheduled speakers have left the area. Participants have begun leaving. The road closures are still in effect.”

And it looks like Sunsara Taylor and Raphael Kadaris, of Refuse Fascism, appear to have been released after being detained earlier. They’re speaking on Bancroft Way, several feet away from “Based Stickman” Kyle Chapman.

12:50 p.m. The crowd has dispersed significantly, says Berkeleyside’s Natalie Orenstein. There’s a small handful of people still inside Sproul, while many others rushed out with Yiannopoulos on the north side of the plaza. About 200 people are still milling about at Bancroft Way and Telegraph Avenue. Some are chanting. There’s no sign of black bloc activists anywhere.

Oakland father-daughter Norman and Ellie Hersch came to "see democracy in action." If it gets unsafe, they have an exit plan pic.twitter.com/qROc97oAXW

During Milo’s brief appearance, “it was like a Beatles concert. His supporters were cheering wildly and shoving all kinds of things at him — signs, condoms — so he would sign them or take a selfie with them,” Orenstein said. He addressed the crowd for about 25 minutes.

When he left, she said, everyone on all sides rushed after him, but he was brought out of the plaza swiftly.

12:31 p.m. Just before 12:30 p.m., a huge crowd chased Yiannopoulos out of the area. He and his security team got into two white GMC vehicles with out-of-state license plates, said Berkeleyside’s Frances Dinkelspiel. Asked if she was afraid for her safety, Pamela Geller told Berkeleyside, “I’m fine, thank you.”

Crowd chasing after #Milo as his security detail escorts him and Pam Geller out #berkeley pic.twitter.com/gYLiGIpHi0

12:26 p.m. Dinkelspiel said Yiannopoulos, Mike Cernovich and Pamela Geller were initially escorted into Sproul through an alternate entrance. They didn’t have to wait in line with everyone else. Dinkelspiel estimates the total crowd, inside and outside the plaza, at more than 1,000 people, with Milo critics outnumbering his fans.

Outside Sproul, protesters chanted, “No Trump, no KKK, no fascist USA.” Inside, Yiannopoulos sang the national anthem with the crowd, “temporarily drowning out the one remaining Refuse Fascism activist’s chants,” said Orenstein. She estimated just 100 people on Sproul itself. (That’s because many people waiting in line were unable to get in due to slow security procedures, readers pointed out on Twitter.)

12:02 p.m. Shortly before noon, two activists from Refuse Fascism were taken away in handcuffs by police, who said they had gone up on the barricades at Sproul, Berkeleyside’s Natalie Orenstein reports.

.@UCPD_Cal detains @RefuseFascism activists, apparently for going up on the barricades inside Sproul #Berkeley pic.twitter.com/9ErgYVtSAZ

Kyle Chapman, “Based Stickman,” was spotted in line to get into the plaza, and Milo Yiannopoulos made his appearance. Wrote Orenstein on Twitter: “The man of the hour has arrived. Greeted by tiny crowd of people allowed into Sproul so far.”

Yiannopoulos proceeded to kneel in “prayer for protesters who don’t know what they’re doing.” He continued: “When I get on my knees it’s not to disrespect the flag.”

#Milo kneels in "prayer for protesters who don't know what they're doing." "When I get on my knees it's not 2 disrespect the flag" #Berkeley pic.twitter.com/TSNKg9kLaC

See a slideshow below that includes some of the photographs of the day. Hover over the image, then use the right and left arrows to scroll. 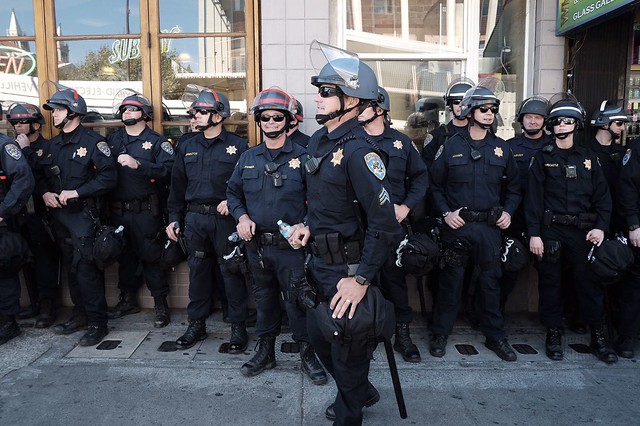 11:46 a.m. Sproul Plaza at UC Berkeley is closed off with barricades, but police have begun to let people through. There’s one metal detector, and Berkeleyside’s Frances Dinkelspiel reports the line is moving slowly.

There are hundreds and hundreds of officers in the area, she estimated, and a crowd of perhaps a few hundred. Most protesters appear to be affiliated with the groups Refuse Fascism and By Any Means Necessary (BAMN). There was one scuffle already between the right and the left, and police had to separate the sides.

At about 11:40 a.m., police confiscated the amplified sound system being used by BAMN and Refuse Fascism after noise complaints.

11:27 a.m. As of about 10:15 a.m., there were dozens of police in and around Sproul Plaza, including on top of surrounding buildings. About 20 counterprotesters were present. Yvette Felarca of By Any Means Necessary made remarks. There are a few Trump supporters in attendance, too. One had a sign ripped up shortly before 11:20 p.m.

At 11:25 p.m., UCPD put out its first community alert of the day: “Protests and traffic congestion near Bancroft and Telegraph. Avoid the area if possible. Expects delays for several hours in the area.”

The scene here at Bancroft and Telegraph is tense, with some small confrontations. Maybe 200 ppl. Police lined up in the middle #Berkeley pic.twitter.com/PQ3y0oOvoO

Chants of "USA!" "Trump!" and ""Free Speech!" on one side; "Charlottesville, never again!" and "No fascist USA!" on other #Berkeley pic.twitter.com/VyNaht8TO4

UC police say @CityofBerkeley is looking into noise level of @RefuseFascism amplification. It is so loud! pic.twitter.com/vREYeGgLwi

@berkeleyside Police moving out of Sproul closer to group of people on opposing sides arguing at Bancroft and Telegraph. pic.twitter.com/s5TYczfhqK

Will #Milo be able to get into Sproul Plaza? Totally blocked off now; protesters on Bancroft and Telegraph #Berkeley pic.twitter.com/jwRDmwqwfX

@berkeleyside just saw a dozen CHP cars full of officers drive up University ave. Going to be that kind of day in #berkeley pic.twitter.com/1TejQ5Gj8e