The formal “Free Speech Week” may have fallen apart, but right-wing protesters are still taking the opportunity to rally on UC Berkeley’s campus, including on Tuesday afternoon, when a group of about 50 marched to People’s Park, spoke there and returned to Sproul Plaza.

See live tweets for the latest news (no account is needed to view them). See more protest coverage.

The group, led by Joey Gibson of Portland-based “Patriot Prayer” and Kyle “Based Stickman” Chapman, along with other right-wing media figures and Berkeley College Republican Ashton Whitty, met first at Telegraph Avenue and Bancroft Way at 2 p.m. But they quickly were drowned out by protesters from By Any Means Necessary (BAMN) and Refuse Fascism, who rallied there to oppose the other side’s presence. Both sides then marched down Telegraph, and three people — including prominent BAMN activist Yvette Felarca — were arrested, to cheers from the right.

At People’s Park, the protesters on the right held speeches and got into a number of verbal spats with individuals on the left, including students. The right-wing marchers returned to campus around 3:30 p.m. where, guarded by a heavy police presence, they encountered little resistance. Gibson said this is far from the last Berkeley will see of him and his supporters: “We will never stop in a million years.”

Berkeleyside’s live coverage of the day follows. Read each section from the bottom for a chronological experience.

See past coverage of Yvette Felarca on Berkeleyside

Update, 9:31 p.m. The three people who were arrested remain in custody at Santa Rita Jail and are set for arraignment Thursday at the East County Hall of Justice in Dublin, according to online records from the Alameda County sheriff’s office. Felarca is being held on $20,000 bail on suspicion of three misdemeanors: rioting, obstruction and battery. Robinson is being held in connection with two misdemeanors, rioting and obstruction, and has a bail of $10,000. Monzon, in jail in connection with a banned weapon, has a $5,000 bail.

Update, 6:40 p.m. The Berkeley Unified School District said, regarding teacher Felarca, it is “monitoring developments in this case. Should an occasion arise for the District to take action, we will respond in an appropriate manner, in keeping with federal law, the California Education Code and the BUSD collective bargaining agreement with our teachers.” BUSD said Felarca is a part-time employee who “worked her normal hours today.” No further information was provided.

Update, 4:25 p.m. Berkeleyside has left the scene. “There were still about 40 on the right there, who seemed like they were about to head out. No protesters at that point,” said Berkeleyside’s Natalie Orenstein.

Now that the protesters have left, a scrim of "Free Speech" loyalists talk on Sproul, ignored by most of the passers-by. Police still here.

Update, 4:14 p.m. UC Berkeley spokesman Mogulof has released a brief statement about all costs related to events since Sunday: “We just want to repeat and emphasize that the estimate of $800,000 in security expenses was for the entire Sunday–Wednesday four-day period. We anticipate no additional costs as the result of activities today and yesterday. All of the law enforcement reinforcements were in place or on the way due to what was a last-minute decision by the students to cancel the planned events.”

Update, 3:55 p.m. BPD reports the arrest of Eddy Robinson, 47, of Oakland, near Telegraph and Bancroft, on suspicion of participating in a riot and resisting arrest. Robinson also was arrested Sept. 14, when Ben Shapiro spoke at UC Berkeley, on suspicion of carrying a banned weapon.

Kyle Chapman and Joey Gibson both spoke again at Sproul, says Berkeleyside’s Natalie Orenstein. The main group in attendance appears to be their supporters. Minimal action happening now. There continues to be a significant police presence. 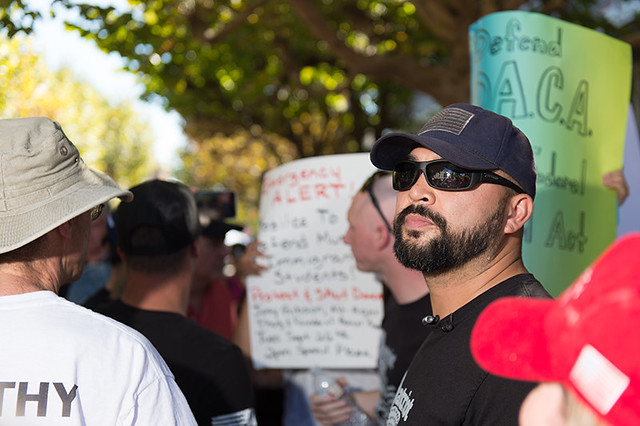 Update, 3:40 p.m. BPD said the third arrest of the day was of a 21-year-old man from Rocklin, near Telegraph and Bancroft, on suspicion of illegal possession of body armor and a probation violation. The march has returned to Sproul Plaza from People’s Park. An estimated 100 people are there, and Gibson said he planned to have more speeches there. BPD said moments ago that the “Marchers have cleared the streets and moved onto the sidewalks. Roadways are opening up.” [BPD said later he was only detained — not arrested. Berkeleyside has removed his name from the story as a result.]

Argument breaks out as to whether these people belong in People's Park. No agreement even about the ground we stand on! @berkeleyside pic.twitter.com/PVndTqL2n0

Update, 3:30 p.m. UCPD reports that “The group is now marching north on Bowditch from Durant. Some traffic is still impacted in the area. Please use caution when driving in the area.”

Update, 3:10 p.m. BPD confirms that 47-year-old Yvette Felarca of Oakland was arrested near Telegraph Avenue and Channing Way on suspicion of battery and resisting arrest. Felarca’s given name is Yvonne, but she goes by “Yvette.” Felarca, a Berkeley middle school teacher, is a lead organizer for By Any Means Necessary and is facing a federal charge of inciting a riot in connection with a neo-Nazi rally in Sacramento last year. BUSD confirmed Tuesday afternoon that Felarca remains employed by the Berkeley Unified School District as a teacher at King Middle School.

An actual conversation taking place at People's Park between the right and left about genocide and white supremacy. @berkeleyside pic.twitter.com/Yq8y7VGPOv

Update, 2:55 p.m. BPD Officer Byron White, a department spokesman, said Felarca was arrested on suspicion of battery and resisting arrest, and there may be other violations to come. She is still being processed. The first arrest of the afternoon was Ricky Joseph Monzon, 20, of Las Vegas, near Telegraph Avenue and Bancroft Way, on suspicion of carrying a banned weapon.

Update, 2:50 p.m. Speaking to the crowd at People’s Park, Kyle Chapman, who is facing a felony charge for possession of a leaded stick at a Berkeley rally, said he was there to talk “about the need and importance for brave warriors, brothers and sisters of God, to stand up for their First Amendment rights and put their lives on the line, and bleed if necessary.”

Responding to another protester asking him to discuss “white genocide,” Chapman said, “There is absolutely a war on whites,” but he went on to say that was not what he was in Berkeley to talk about. A couple dozen people remain in the park, according to Berkeleyside reporters on the scene.

Update, 2:47 p.m. The latest from UCPD: “Protesters holding rally in People’s Park. Police are monitoring. Use caution when walking near south campus and be aware of your surroundings. Crossroads and 2610 Channing Street are secure. No entry into the building is allowed.” That followed an earlier update a short time prior: “Approximately 200 protesters are approaching People’s Park. Protesters are near Crossroads and the residence halls. Stay clear of the area. Be aware of your surroundings.”

Update: 2:35 p.m. Police have detained Yvette Felarca, reports Berkeleyside’s Natalie Orenstein. Felarca, and other members of By Any Means Necessary, were at the front of the march on Telegraph Avenue — near opponents Kyle Chapman and his supporters — when police swooped in, put Felarca on the ground, and handcuffed her. Officers walked her to a police vehicle and drove her away.

The march has slowed down near People’s Park for the time being.

Update, 2:30 p.m. Gibson announced his visit to Berkeley while live-streaming on Facebook and Twitter on Monday. He said it would be an “awesome day” and said his group had an “awesome plan” to meet at Sproul Plaza at 2 p.m., then march to an undisclosed location where there would be amplified sound.

“Bring your flags … whatever it is you gotta bring, OK?” he said. “We are participating in history right now as we speak because we are literally living through a revolution.” Gibson said he stands for freedom, patriotism and free speech, as well as love and unity.

He has also appeared in the past with white nationalists, however. He has disavowed those groups more recently and said he has no sympathy for those views. Portland, Oregon-based Gibson — who has repeatedly pointed out that he is not white himself — also held a rally one week after a fatal stabbing “by an alt-right fanatic” on a Portland train, according to the Southern Poverty Law Center, which has concluded that Gibson’s campaign “appears more an attempt to troll the left than a sincere effort at dialogue.”

Gibson said in his live-stream Monday that he and others need to put pressure on Berkeley to push back against groups such as By Any Means Necessary (BAMN) and antifa, and “stand up for free speech.”

“You can elect all the communists that you want but you have to respect the constitution,” he said. “We will destroy your narrative by coming in, talking about freedom, talking about love and peace. These are things 99% of Americans agree with and you cannot stop us.… Your lies, your deception, your darkness will be uncovered. It is being uncovered right now as we speak.”

He said, in closing: “They hate the media attention, the national attention that we’re bringing into Berkeley … because it’s exposing them for who they are.… So we will use that against them, we will continue to bring attention on Berkeley because there are some disgusting things going on in Berkeley. I’m telling you: There are disgusting things.”

Update, 2:05 p.m. Berkeleyside’s Natalie Orenstein said “There are about 10 loud protesters drowning out a speech” by Joey Gibson, of Patriot Prayer, “who ran into the ‘Empathy Tent” set up on Bancroft.'” The crowd’s slowly growing, she said, with around 10 on the right, 10 on the left, and many police and reporters.

UCPD estimated there were 40-50 protesters in Sproul Plaza as of about 1:55 p.m., and continued to advise people to “Avoid the area.”

Update, 1:12 p.m. UC Berkeley spokesman Dan Mogulof told Berkeleyside’s Natalie Orenstein earlier in the day Tuesday that the rally “will be stopped if they disrupt classes.” He said the university isn’t sure what to expect from the event, adding, “Their announcements are so hard to understand.” Mogulof said amplified sound is not allowed by “anybody who comes on campus who hasn’t reserved a venue, or been invited or sponsored by a student group.”

He declined to discuss security arrangements, which is in line with the university’s general stance on the subject.

Original post, 12:49 p.m. Authorities have put out a community alert about a rally planned on campus Tuesday at 2 p.m.

UCPD said a group called Patriot Prayer will rally in Sproul Plaza, and “Counter protests associated with Patriot Prayer’s appearance have been announced.”

Pedestrian traffic near the plaza “will be impacted” starting at 1:30 p.m. and continuing until at least 3 p.m.

Said UCPD: “If you choose to engage in the protests, we encourage you to review our suggestions found at this link: how to protest safely. UCPD will not tolerate acts of violence or the destruction of property, and will dutifully investigate, arrest, and prosecute anyone who commits crimes on our campus.”

Police said they will provide updates via the Nixle alert system.

The city of Berkeley posted reminders in the past 24 hours about its own rules, related to prohibited items, at various locations in the city.

Berkeleyside senior reporter Emilie Raguso oversaw the live blog for the bulk of the day, and contributed reporting to the story. Berkeleyside reporter Natalie Orenstein wrote the introduction to the piece, and sent in updates from the field, along with freelancer Daphne White. Photographers David Yee, Ted Friedman and Daniel McPartlan contributed images to this story.

Emilie Raguso is Berkeleyside’s senior editor of news. Email: emilie@berkeleyside.org. Twitter: emraguso. Phone: 510-459-8325.
Natalie Orenstein reports on housing and homelessness for The Oaklandside. She was previously a reporter for Berkeleyside.