Update, July 19, 8:45 a.m. The red flag warning issued by the National Weather Service for the Berkeley Hills has been canceled. Originally planned to extend until 5 p.m. Monday, the advisory was canceled 3 a.m. Monday.

“Much of the monsoonal moisture tracked offshore overnight and did not result in thunderstorm activity for the Bay Area/Central CA coast,” the weather service wrote.

The advisory will be in place from 5 p.m. Sunday to 5 p.m. on Monday. The NWS said there will be “erratic winds” and a “slight” possibility of dry thunder and lightning locally, which could rapidly spark wildfires.

“Thunderstorms will be a mix of dry and wet, but given how dry the fuels are, any lightning strikes will be problematic,” the NWS said in its advisory, referring to ongoing drought conditions in Northern California.

Some rain is forecasted Sunday night, in addition to the thunder and lightning, but not a significant amount.

Last August, the lightning complex fires in California were ignited by numerous dry lightning strikes. Berkeley partially felt the impact of those fires, with several weeks of poor air quality due to fires in and surrounding the Bay Area.

More information is available in Berkeleyside’s guide on how to stay safe when fire risk is high in the Berkeley Hills, and from the city. 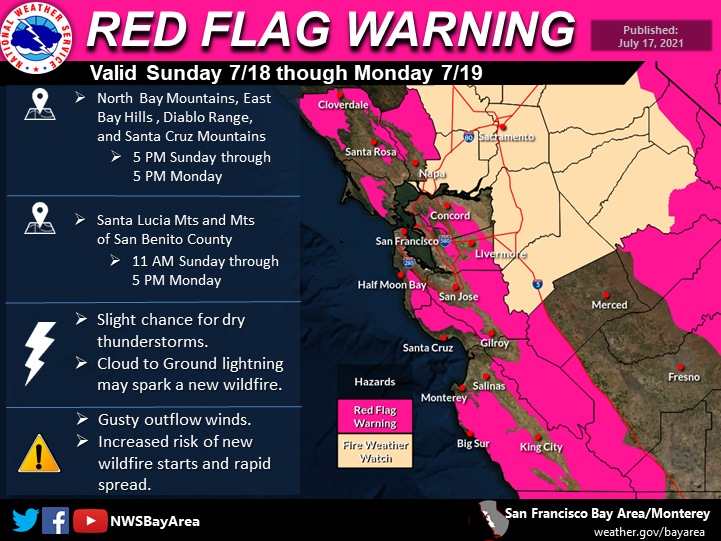 Delivered to your inbox at 5 p.m., the Daily Briefing brings you all the latest Berkeley news in one handy place.